Trends in fashion come and go, but one thing that has had an impact on the fashion trends on the Copperbelt in general and Chingola in particular, is its proximity to the Congolese border. With a heavy amount of trade at the respective countries’ border posts, the influx of Chitenge fabric and designs have greatly influenced the tastes of the citizens. It’s not uncommon to see dresses and shirts of different.

It was while she was at college that Gertrude Mutenda started making and designing clothes for others. “I had been sewing myself blouses and skirts since grade six. But after college I taught for six years. And when I wasn’t busy teaching I started making clothes for my family and close friends.

“Every so often clients come in with designs and ideas that you can tell are as a result of their exposure to the Congolese market and media. Their designs tend to be more elaborate and with extra care taken with the finishing. They are usually highly decorated and closer fitting.”

Chingola has many people who know how to sew but the art of pattern cutting and designing isn’t as common. Gertrude, with qualifications in both was therefore able to establish herself among the clientele for her knowledge and professionalism. Clients often trust her to use her creativity and experience to make garments she feels would suit them.

“It’s very fulfilling to put together an outfit that the client is pleased with. Especially as they often say “you go ahead. You know my figure, you know the material, and you know what will look good on me.” That always brings satisfaction.

While the designers from neighbouring countries may be deemed as competition, those from further afield are rightly seen as threats to the fledging Chingola industry. The ubiquity of inexpensive Chinese clothing has restricted traffic into design houses, with more and more people opting for the imported alternatives.

“The Chinese have brought cheap materials and cheap ready to wear clothes. Though popular the quality is generally recognised as poor. The pieces are often loosely stitched and have to be taken in to a tailor to be redone. But despite the quality of the finishing we can’t compete with the price. They are much cheaper than locally made outfits.”

The only response to this has been to ensure that the Kumbis Design team match the quality of work offered by their colleagues beyond the Kasumbalesa border. “We are constantly trying to learn as much as we can on how to improve our work. The competition isn’t letting up so neither should we.”

On why Congolese craftsmanship seems to be superior Gertrude was unequivocal on the reason. “Too many Zambian designers like to cut corners. There are many who do outstanding work but it’s common to see too many try to do as little as will suffice. That why you often find many people engage Congolese chief designers so that we Zambians can learn from them.”

This threat will do little to hinder Gertrude though. As a cancer survivor she is no stranger to the battle. Her triumph has reinforced her resilience and fighting spirit.

Ruth, Kumbis’ social media intern has seen the boost Gertrude’s triumph gave the whole crew. “Seeing mum battle and overcome cancer has given us all a lift, personally and professionally. I think Kumbis has become more focused and less fazed by obstacles. There has been a real mentality shift and we now see more of the bigger picture.”

Part of that bigger picture has seen Gertrude try to ensure that Kumbis is not just about business. As a very active member of the Chingola civic community she contributes to causes of all sorts. As chairlady of the Chingola Young Christian Women’s Association (YWCA) Gertrude is often called upon to spearhead work with young and vulnerable women in society. This has also been incorporated into the Kumbis’ ethos, donating various resources to the cause.

Kumbis desire to give back is matched by their desire to see the industry develop in Zambia. Gertrude comments, “Evelyn Hone is a renowned college of fashion and people who have been through there have a certain level of standing locally. But I think Evelyn Hone is missing out on something. Being such a big name they need to reach out to those that are in the field to get them to attend more short intensive courses and workshops, so they can polish up on certain aspects of their work. As the market changes they should be on top of it. It would help the industry.”

On the outlook for fashion, especially in the Copperbelt and midlands, Kumbis are hoping more effort can be made to either bring Zambia Fashion Week to other parts of the country or establish a sustainable show. “We could have provincial shows with the best of each receiving an invite to the Lusaka show. So in that way people will look at the industry with more interest. And it would help everyone think more creatively.”

Whether or not Evelyn Hone and others take note of the advice given, Kumbis and others shall continue to adapt to new landscapes and resist old threats. Diversity and resilience shall be the order of the day. 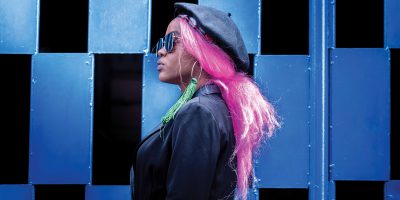